Read More:
​
8. Preventing genocide
The United Nations brought about the first-ever treaty to combat genocide—acts committed with the intent to destroy a national, ethnical, racial or religious group. The 1948 Genocide Convention has been ratified by 146 States, which commit to prevent and punish actions of genocide in war and in peacetime. The UN tribunals for Yugoslavia and Rwanda, as well as UN-supported courts in Cambodia, have put would-be genocide perpetrators on notice that such crimes would no longer be tolerated. The Holocaust and the United Nations Outreach Programme seeks to remind the world of the lessons to be learnt from the Holocaust in order to help to prevent future acts of genocide. The Secretary-General’s Special Adviser on the Prevention of Genocide monitors dangerous situations, brings them to the attention of the Secretary-General and the Security Council, and recommends action.

9. Combating Sexual Violence in Conflict
Rape has increasingly been used as a weapon of war. An estimated 60,000 women were raped during the civil war in Sierra Leone (1991-2002), up to 60,000 in the former Yugoslavia (1992-1995), up to 250,000 during the genocide in Rwanda (1994), more than 40,000 in Liberia (1989-2003) and at least 200,000 in the Democratic Republic of the Congo since 1998. Sexual violence has characterized conflicts from Afghanistan to Iraq and from Somalia to Syria. The Secretary-General’s Special Representative on Sexual Violence in Conflict has helped countries develop and implement laws that criminalize wartime rape and end impunity for perpetrators; helped countries devise programmes that assist victims to rebuild their lives; provided training for police officers, prosecutors and judges so they are better equipped to address such crimes; and supported the development of specialized units of female police officers that investigate allegations of wartime rape.

10. Promoting Development
The United Nations has devoted its attention and resources to promoting living standards and human skills and potential throughout the world. Since 2000, this work has been guided by the Millennium Development Goals. Virtually all funds for UN development assistance come from contributions donated by countries. 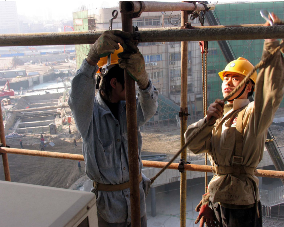 Construction workers at work, Tianjin. China. Photo: Yang Aijun / World Bank​
For instance, the UN Development Programme (UNDP), with staff in 170 countries, supports more than 4,800 projects to reduce poverty, promote good governance, address crises and preserve the environment. The UN Children's Fund (UNICEF) works in more than 150 countries, primarily on child protection, immunization, girls' education and emergency aid. The UN Conference on Trade and Development (UNCTAD) helps developing countries make the most of their trade opportunities. The World Bank provides developing countries with loans and grants, and has supported more than 12,000 projects in more than 170 countries since 1947.
​
Edited by Patrick Sciarratta
​